Here you will find any important info about the game and the forum!

During your everyday gameplay you might happen to mine, chop wood, fish, build, craft and siege: these are FT trades (described in Game Manual).
The more you practise them, the more skilled your character becomes.
Each character class is more or less efficient with trades, as described and discussed in this post.
Values in the following table are used to adjust skills depending on the class: 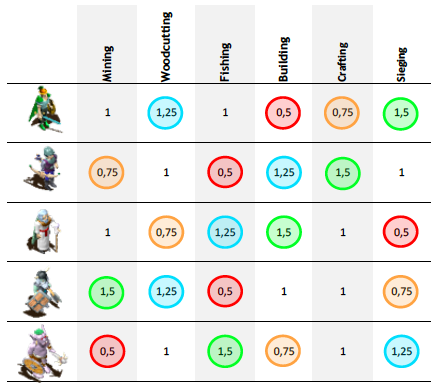 Crafting skill levels improve your craft success percentage. Values in the table modify the percentage increase you will gain at skill level up.

Mining, woodcutting, building and fishing skills will reward you with a result (a hammer hit for building or a item drop for the other trades) after a certain amount of seconds. How many seconds? That depends on your skill level.
Your skill level is visible in the “Hammer” tab inside your ingame Handshake menu. In case you’re using a Great Tool, read the following tables adding 1 to your real skill level, while a Mithril Tool adds 2.

In the following table: time values (expressed in seconds, values rounded to closest integer) for each class, skills levels from 0 to 12 (note: 12 is not the maximum level, it just is the one where this table stops). 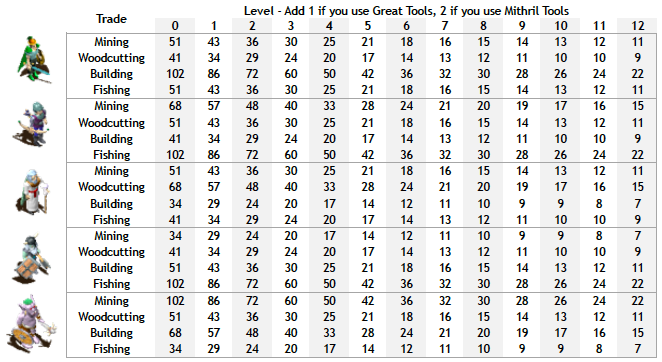 In case you wish more precise values, here they are (don’t forget to adjust your level depending on the tool you’re using - note again that table stops at 19 just for table-design reasons, not because this is a maximum level):

Note: this post is the result of the combined work of kromelg (who also calculated and provided tables values), MadMikael (who also provided motivation) and myself
[GM] ardesia :: Game Admin :: Currently retired
If you need contacting me, write my vasinta forum account a message
Top
Locked
1 post • Page 1 of 1