I forgot to mention mak...im not on the americans side...or do you forget..im your ally, the americans kill me for it..your people kill me because i still proudly own ObeY. I care less about your or their pettiness. I just find all of the hypocrisy both sides have.. i will say it proudly again...I CHOOSE LESTAT'S SIDE....
We are judged more by our actions than by the words we speak. Remember this, as our actions are a direct result of how we deal with situations, our words can be contemplated and show compassion when in actuality we have none.
Top

There is no logic in your words, I emphasized the most basic thing is that we do not do anything that we did with us 3 years ago.We did not write how bad everything was because they dominated us.This game.This a clan war. We are not obliged to justify what we do.
Top

No but you are obligated to follow the rules. Just because player a got away with it and player b got caught...player a was still wrong.. you seem to not understand that part...

And btw how goes the lev castle and seige party you have at sdWW?
We are judged more by our actions than by the words we speak. Remember this, as our actions are a direct result of how we deal with situations, our words can be contemplated and show compassion when in actuality we have none.
Top

Mr_Maks wrote: ↑
Thu Sep 19, 2019 8:13 pm
The balance of the rule is if you are not allowed to do what they did to you?You was see how APEX build their castle for help in destroy Lev.You want to ban what our enemies were allowed to use?In this there is no justice.This tactic has been used against us and should not be banned for us.
Why didn't try to change the rules when APEX built their castle under Lev?But no,all players were all silent and now when we try win it need blocked?
Why should the rules change if we show that this tactic can be defeated?This rule will never be justified.

was I a GM then mak? No.
Did I have any ability to say hey this is agianst the rules and get a GMs attention then? No.
Did GMs check clan maps often then? No. GMs where hardly active then.
You constantly want to accuse me of holding a grudge but it seems clear that the only one that holds grudges is you mak. I wasn't able to help back then I'm sorry. If I could have I would have. It is a breeze in the wind for me to put my differences aside for a better future I am all for letting the past go and live the here and now better than it was in the past. I'm not sure if you noticed but the game is still progressing. Mistakes happen sometimes but then they are fixed and then prevented. Players use buildings for defense during attacks (mistake) then they are fixed (rules clarified) then they are prevented (a GM can come and enforce the rules *rules that have not changed*)
APEX did it to Lev one time. How many times has Lev's team created a alt clan and used spam clan buildings to benefit them in destruction? A lot more than once and are you punished for the past? No but the rules are enforced now. If you don't want to follow the rules that's fine but don't cry if it causes problems for you.

I'm not trying to insult or accuse or belittle you or anyone else like you do. All I am saying is the past is in the past let it go like everyone else has and enjoy what the future has to bring if you patently wait for it. Stop pointing fingers and stop trying to do thing your way or no way. The future is brighter if you can just stop casting smoke to cover the sun.

A forum has always been open to create topics about it.If you wish, you could create a post in which you indicated this and asked GM to make rules about it.For it no need be GM.What of this was said where it was?I have not seen anything like this on the forum.Now you want to change the rule, so what...Nobody tried to help our team and it was hard for us like anyone in this game.
We did not sleep at night because of the shared 7-9k accounts that played 24/7.Our team deserved this victory by the same rules that try destroyed us.
Top

These rules should have been when the whole game destroyed the last Russian clan.Now they do not make sense because you missed that moment.If we survived it, other players will be able to survive it too and this will be true for all players.You do not do justice if you forbid what was allowed for the enemy of the clan which hung in the balance from destruction.Moreover, we showed that it can be conquered.So why is it needed if not to help its old allies?
Top

As I said before I'm not agianst anyone nor am I for anyone in the clan wars. I have bigger things to keep me occupied. If anyone break as the rules (I DO NOT CARE WHICH SIDE) if I'm available I'll go there and fix it. If I'm not available it's not because I don't want to help a specific player or team it's because I'm not able to be there at the exact moment anyone wants me there.

Your free to do what ever you want in your clan wars just follow the rules.
Two wrongs don't make a right. Just because someone did something dirty to you and did not get caught does not mean it's okay for you to do the same dirty deed to someone else. Especially when someone may be available to come and check on things.

If you are not sure about the rules then do what you think is okay. But you have already been told specifically what is not allowed. Multiple times.

Just please stop all this nonsense arguing constantly about what is unfair and what isnt. Leave well enough alone so it can improve.

You expect us to let you break the rules as they did? I hope not. They lost everything clans friends and accounts. You will to if you wish to do things your way. No rules have changed. They are the same. Difference is there is someone to enforce them. It's not that difficult to understand.
Instead of wanting to be like the abusers of the past, prove that you are better. Not equivalent.
Game Administrator
LORD SETH
Languages: English
Useful Links:
- General game help
- Quest list
- Forum Rules
- Game Rules
FOLLOW RULES THEY ARE HERE FOR A REASON
STATUS: TORPID
Top

Mr_Maks wrote: ↑
Thu Sep 19, 2019 9:00 pm
These rules should have been when the whole game destroyed the last Russian clan.Now they do not make sense because you missed that moment.If we survived it, other players will be able to survive it too and this will be true for all players.You do not do justice if you forbid what was allowed for the enemy of the clan which hung in the balance from destruction.Moreover, we showed that it can be conquered.So why is it needed if not to help its old allies?

Again, you persist in whining about events from years ago. That clan is gone. Those players are gone. Their actions were undone. The accounts you talk about being shared have been jailed for nearly 2 years. What makes you think that repeating their actions (spam, sharing, etc) would have a good effect for YOU? You would also find yourself jailed, or buildings deleted, etc.
And PLEASE stop lying about not being involved in the spamming of map 201 back then. I was there. I know better. Perhaps you need the reminder again?
Omnes Autem Uri
Top

What are the rules?Rules what you created?We do not break anything that was in those rules.Our GRUZ tower was not in the radius of castles and towers as it was written in the rule that you yourself described.

If your clan places buildings outside of your clan's established base, and into a contested area or within an enemy's base area, this may be considered spam.

(we did not build within their base,our tower stay far from their within):: Show 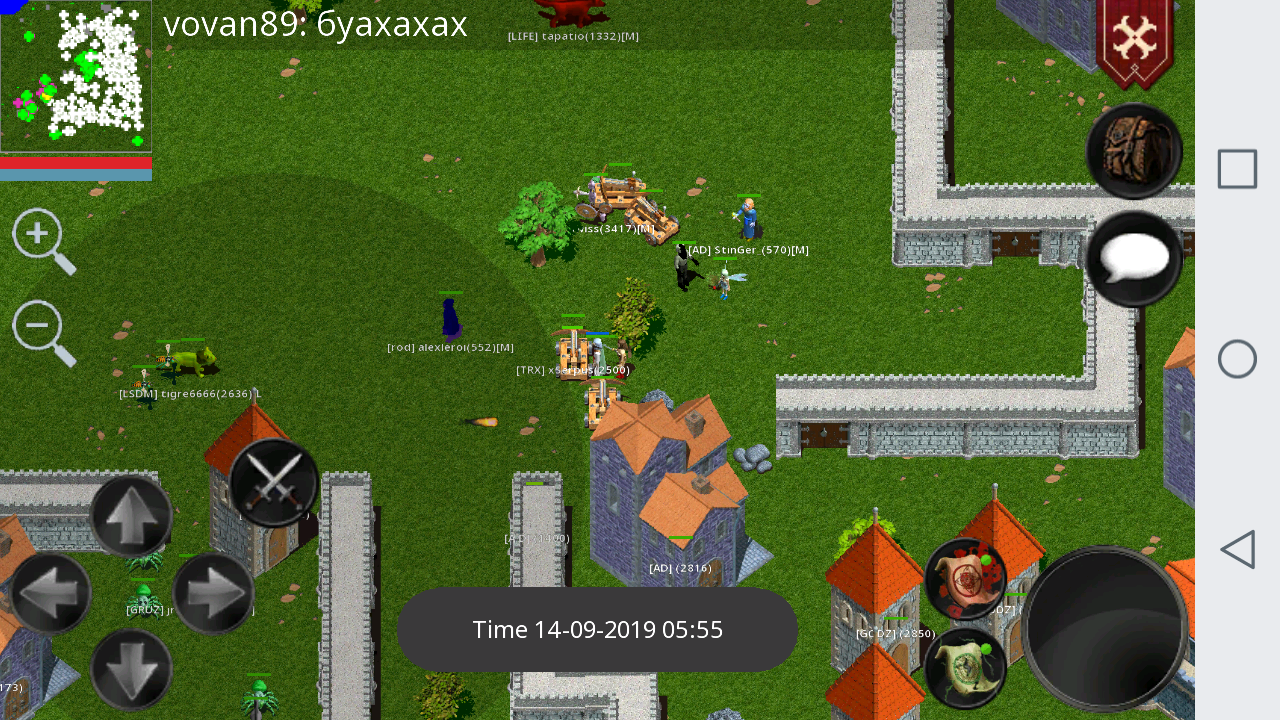 (Note.1) A contested area is a location in enemy boundaries (within enemy clan tower/castle range) a contested area is also a location currently occupied by clan warfare.(The tower was not within the radius of other castle/tower we also cleaned the zone from clans as it is written in the rule and did not war during the building,only defense) 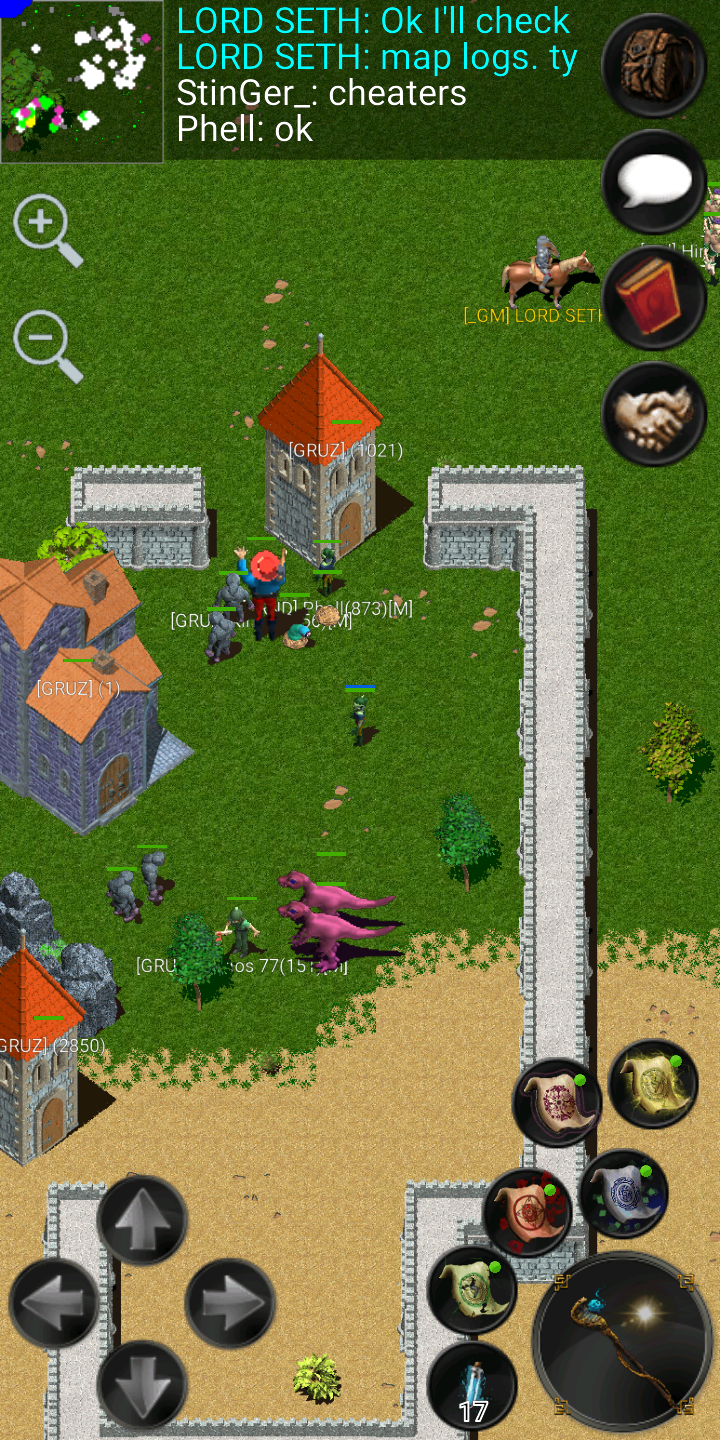 You illegally moved the GRUZ tower, which was built according to your own explanations, and banned the player jra2015.
He could not be banned for what was not in the rules as the compbtant wrote: your rules are difficult and not clear.

Do you follow the rules in this game or is there no difference if you can come up with new ones and apply them without even telling the truth?You can only come up with new rules to help your old allies and not because it was dishonest to us.

Create new rules as many as you can forbid to build bans to destroy, do everything to make the clan war impossible. Destroy this game with the new rules only because you can.
You came to GM just to create new rules but you ignore the fact that you didn’t try to help our side three years ago.You didn’t write a single line about the fact that it was unfair and now when we destroying your old allies you are trying to prove that it is not legal.
If you really thought it was unfair you would have done it all while you defended the innocence of KOREA.But if they do this with us, then it’s honest, and if my friend went to jail, I will defend my innocence to the end.If korea was in prison, you were able to influence this, but you did nothing to influence the fact that our enemies did what you want to ban.
You can prove your point indefinitely but just admit in your soul that you are doing this to help friends from clan card 2.2 and not to add justice to this game.
I repeat if you thought it was not fair you would try to achieve this when the violation occurred but you would rather wait until you are admitted to GM and when we manage to defeat them.

I just hope that compbatant will understand why all these new rules want to be introduced and make the right decision.
Last edited by Mr_Maks on Fri Sep 20, 2019 7:45 am, edited 1 time in total.
Top

Hey mak...if you want to get down to basic truths and rules.. the making of a clan to use for destruction of other clans is considered spam....thus gruz is in itself a spam clan...it was used as primary force in overtaking map 4,2. Once destroyed from there it was a name only. When u cleared enough area it was built at 2,2( with no alliances, as an enemy only) many left the clans they were in just to help in building and seiging using the gruz name..

Simple Truth
We are judged more by our actions than by the words we speak. Remember this, as our actions are a direct result of how we deal with situations, our words can be contemplated and show compassion when in actuality we have none.
Top

Simpler truth: much of this thread -

Warriors are not the ones who always win, but the ones that always fight.
Top
Post Reply
60 posts