Tnickel wrote:The biggest problem with PvP is current the formula used in order to determine the amount of damaged done by a classes. 1 str is equal to 1 damage and 1 mana is equal to 1.25 damage per point. While this is a small number when dealing with low stat but plug numbers in 1,000 str is 1,000 damage per .6 second with speed of level 7 and 1,000 mana is 0 to 1,250 say 3 clicks a second some mages can do more that is 3,750 damage per second compare to the archer at roughly 1,600 damage per second. The mage doubles the amount of damage done at level 1,000.

My suggestion the formulas need to be readjust yes I believe so, however nerfing a class is moral bad for the game I'm sure all will agree. What I suggest may be a little crazy but here it is. (Will explain stat formula in end)

Mages - I'd suggest leave everything alone as they seem to be able to handle themselves. With the exception to prevent spamming Slow (I'm guilty of this in PvP against high levels often forgot when fighting a decent fight) is putting a 5 second cool down or whatever.

Archers - First there skills should be individually set but only allow one active at a time. Also the freeze spell should freeze upon every successful hit.

Warrior - This class is pretty well balanced I would say other then what most melee class complain about the targeting system needs to be set to an auto function. I would also do a individual skill set with each of the melee classes with only allow one skill active at a time then the cool down after wards like normal.

Dwarf - The dwarf overall is great at PvM and can out level almost any class currently. However on the PvP side of things the only skill worth anything is the speed +2, and sometimes the mana shield if mage not too high level. With that being said I think mana shield is an awesome skill with a little bit of a bite say 50% mana blocked, and 2% redirected back at the mage, or maybe not redirected but causes the mage to be stunned in place for 5 seconds.

The Tank AKA Ogre - The ogre is not a class I have played much so warning I have a few ideals but may not be perfect. The ogre is designed to take a beating on the battlefield, he's the one who likes to get up close and dish it out. I think their skills are fairly decent especially the stun skill taking 50% of the mana away but fighting a high level mage is that really going to do anything if he regenerating 200 to 300 mana every 5 second. What you say we modify this not sure how hard it would be but upon a successful stun hit it takes 50% mana and causes regen to stop for 10 to 20sec.

Now for the stats, the biggest thing I see here is you have a Mage their main stat are Mana, and Arm simple easy to follow. The rest of the classes have to worry about Str, Arm, and Dex. What if we kept the stat formula as they are but added a .25 to damage onto Arm, and/or Dex this would bring the damage field to almost even out as the other following class for what the mage could do in extra damage by clicking the other classes have nearly x4 the health of most mages.

Hell yea T my boy did his homework as you can see thumbs up ninja!
DEMONS
-FOCUS-
HAMMERBITE
DIGMEUP
GRUNDLE
CARNAGE
DEMONSCENT
Top

blitzcraig wrote:that's really interesting, hammer... as example using current formula, it could be green flow = 500 + natural_mana x 25 with mana cost of 50, and recharge time of 2 seconds (you all know I think formula needs changed, but this is a simple example of 1 way it could work using current numbers, figuring 5 casts per second )

FT NEEDS A TOUGH VOICE. IM HAPPY TO BE THAT. I HAVE NO PROBLEM BEING THAT

JUST BECAUSE I ROAR DOSENT ALWAYS MEAN I'M MAD. SOMETIME I JUST WANT TO BE HEARD 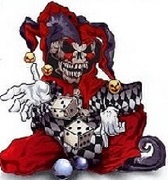 Yea it is 7 but to actually cast 7 a sec be almost insane most I'd ever done is 6 on a good day. The avg is around 4 to 5 mages with lag around 1 to 3 cast per second. But posing this would slow our attack rate down but give us an increased damage rate, some probably find that unfair but mages HP is crap unless you put lots points in ARM 100 points equal 19.8k hp in arm and 100 points in str add 9.8k hp. The only problem I see with this is now mages damage would be so high they click one button and spawn drops dead for most part. Which I see PvM problems worsen thinking about it last night. There really is a limited ways to fixing this system, nerfing the damage bring the multipliers down to equal rest but silghty higher due to hp, or bringing the other classes up. The only other option I would see is slightly increase melee damage, give archers a lvl 300 or maybe 500 bow with range of 10 this gives arch a slight up hand. As for melee class increase range to 2 and a 5 to 15% hp increase.
Twisted Nickel AKA Death Cl0wn
Top

it's actually 6 right now, but like tnickel said, 4.5-5 is pretty good.... anyway, the formulae need to change imo anyway, I was just giving example of how that idea might work... it would give mages a lot less control though, so I'm not sure about it

I'm really excited about these ideas. I hope some get implemented. Also, for those of you who have questions, please check out viewtopic.php?f=12&t=7476
RETIRED [GM] - Game Master

blitzcraig wrote:it's actually 6 right now, but like tnickel said, 4.5-5 is pretty good.... anyway, the formulae need to change imo anyway, I was just giving example of how that idea might work... it would give mages a lot less control though, so I'm not sure about it

I dont mind loosing power if it evens pvp for everyone out.
Knight-2037

FT NEEDS A TOUGH VOICE. IM HAPPY TO BE THAT. I HAVE NO PROBLEM BEING THAT

JUST BECAUSE I ROAR DOSENT ALWAYS MEAN I'M MAD. SOMETIME I JUST WANT TO BE HEARD

How about a increase in mana cost it takes to cast a spell, say a lvl 100 casts a spell it costs 10 mana, a lvl 1000 casts same spell takes 100 mana
DNR HAMMER- self sufficient mage (you ain't goin rough enough)
HAMMERBITE- mage (muted)

why not just a base % say like 5 to 10% overall or base mana per cast on green/heal, arm non stackable but increase the amount of arm say 50arm + base mana x 1-2 last 10 to 15 sec. I'd make yellow which is a single target attack 1-5% base or overall mana to cast.
Twisted Nickel AKA Death Cl0wn
Top
Post Reply
418 posts