Here you will find any important info about the game and the forum!

This world map is a bit outdated, since there are new maps and dungeons. (Arachnia) 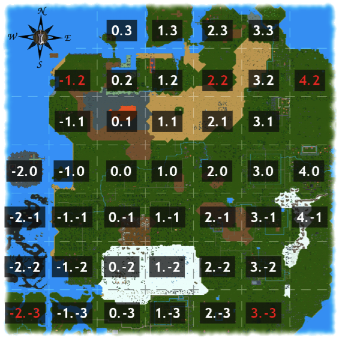 Red coordinates indicate clan maps (mind the underground one, not visible in this image)

A very detailed world map can be found here: http://dmgamestudio.com/map/
And this is a (slightly out of date) map of dungeons: 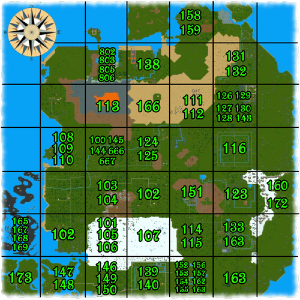 FT world is composed by a main continent and several islands around it.
Some of them can be reached simply crossing a bridge, some require navigation, which can be provided thanks a few helpful boatmen and ship captains (well, some of them might require help or payment).
In order to move around the world you mostly walk around, so it’s important you try acquiring good boots!

There are several magic teleports, which will whisk you around in no time: Show 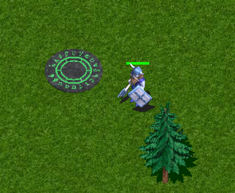 The world map is visible in game: click on the minimap on top left corner of your screen to see it.
Addition: with the map open, you are able to click any point of it to display the coordinates on the map; use the back button on your device to close the map.

The whole FT world is tiled in a series of maps, which are populated by villages, cities, mysterious dungeons, NPCs and monsters, not to mention other players. Maps are organised, and referred to, in a cartesian coordinates system.
You enter the world in a special map, often referred to as spawn map, start map, or map 0.
This map is the center of the world, the coordinates system refers to it as (0, 0).
All maps are referred to by an X,Y couple having its center at start map.
In this starting map and in the one below it (that map being (0, -1)), PvP is not allowed and you don’t risk being attacked by other players.
Monsters in some maps are more dangerous than in others; in general, maps closer to start map are less risky than ones more far away.

There also are several underground maps: caves, dungeons, cellars and basements are awaiting for your visit, monsters and dangers ready to welcome you! They are referred to with a special code, unconnected with main ground level cartesian naming system.

You can have a view of the world map and it’s coordinates system here: viewtopic.php?f=4&t=12249

Points of interest
As any populated world, FT has cities, villages and special places. Here is an overview of main locations:

Last but not least, there’s a map you might wish never to visit: the Jail - a small room with no way out without GM assistance; if you end up here, you should contact a GM via forum PM. You may have a message on your game account telling you exactly who to contact; you should check that first.
[GM] ardesia :: Game Admin :: Currently retired
If you need contacting me, write my vasinta forum account a message
Top

Re: World Map and main Points of Interest

The World Map image, a to-be-updated underground maps image and the link to the satellite like map, are now added at the beginning of this topic: check the spoiler!

As per the several requests, clan maps are marked red in the map there.
[GM] ardesia :: Game Admin :: Currently retired
If you need contacting me, write my vasinta forum account a message
Top
Locked
2 posts • Page 1 of 1